Not Your Average MOPS

I think I’ve mentioned this before, but two awesomely awesome chicks from my church started a MOPS group a few months ago and I am a mentor mom. I tell the young mothers how NOT to raise their kids. JK! But kind of not. (For those text-illiterate among you, “JK” means just kidding.) We had our February meeting last Wednesday night and in honor of Valentine’s Day the subject was spicing up your marriage. Now I never belonged to MOPS when my kids were little, but HOLY MOLY I never pictured a MOPS meeting like that! Our Children’s Ministry Director – Kelly Clark – was the speaker and she had us rolling on the floor. She was (and is) hysterical! And while spicing up the marriage was part of her message, it was more about nurturing that relationship when the kids are little and how important it is.

After that we had a “marital relations expert” on hand to “give advice” and “share ideas” about “turning up the heat”. She also had “certain items” for purchase to “aid in said advice and ideas”. (Quotation mark overuse?) Now some may find this appalling and maybe even offensive, but I make no apologies here. Sex between a husband and wife is a good thing. A really, really good thing. A really, really good GOD thing. And sex between a husband and wife of small children can be a nonexistent thing. So I say if a couple needs a little som’n som’n to help in that area then by all means.

Next month I’ll be talking about breast cancer. I know, right? Talk about a hard act to follow. And believe you me. February’s meeting is not one that is likely to be forgotten any time soon!

Presidents' Day And Other Happenings

Happy Presidents' Day - especially those of you who get the day off of school or work. Personally I'd rather be celebrating spring. A warm, but not hot, sunny day with the windows open and the smell of fragrant flowers wafting through a very clean and dust free house (it's my fantasy, isn't it?). While I'm at it, on this very lovely day I would like to be boxing up clothes that are now much to large for me and putting away my new, significantly smaller clothes that fit just right and proclaim a chic, yet casual sense of style...

Wow. That was a great happy place. I'll have to remember to go there more often!

There is still snow everywhere. Mostly still pretty snow, except for on the sides of the roads. A good deal of that snow is rather dirty. And the snow on our deck? Sookie has an issue with getting off the deck with all the snow in the yard so she's been using the snow on the deck AS HER RESTROOM! "Don't eat yellow snow" has taken on a whole new meaning. Not to mention the poopcicles out there. Just... yuck. The silver lining? I'll get back to you.

And guess what! They're calling for more snow tonight and tomorrow night. At one time some meteorologists were saying we could get another 10 inches. Thankfully that thought is now passe and they're talking about 2 to 4 inches where we live. The silver lining? Because it's supposed to snow tonight and into the morning hours I think school is going to be delayed by 2 hours. Not such a bad thing considering we've all had the last six mornings to sleep in late. We could use a 2 hour delay to ease into getting up early again.

While I'm on a roll here, I think I'll just keep up the slightly negative tone of this post.

Todd and I are sick. Late Friday afternoon he started complaining about stomach cramps and I just figured he was being some kind of a baby (because I lack compassion. It's true.) Friday night, however, as Katie and I were watching The Princess Bride (as opposed to the opening ceremonies - don't judge me. I'm still a proud American) my tummy started doing the same thing. Sure enough. We both ended up with some weird kind of stomach bug. There has been no throwing up, but a lot of wishing there was some throwing up just to feel better. And there's been quite a bit of, um, "running" to the bathroom, if you catch my drift. I was actually going to go into work this morning, but my stomach still hurts and I can't eat much of anything without feeling horrible. Weird. The silver lining? I'm starting my weight loss program today! And heaven forbid the kids get it and miss school - from my fingers to God's eyes.

My sister, Terri, lives in Fort Worth. They, too, had snow. Quite a bit for that region, in fact. She had a great time playing in the snow with her grandson, Anthony. They had snowball fights and built a snowman. Lots of fun for an awesome grandma. But she slipped and fell Friday night on her driveway, breaking her leg at the ankle and requiring an ambulance ride to the hospital. They set it and put a splint on it, but when the swelling goes down she'll require surgery. The silver lining? They prescribed her some killer goofers!

I've been reading An Echo in the Bone by Diana Gabaldon for the last couple of months. It's a little over 800 pages and I'm having a fairly difficult time with it. If you don't know anything about this book I'll tell you. It's book number 7 in the Outlander series. The first several books of the series are amazingly good and the real talent DG has is for building such complex characters that you end up feeling as though they're good friends. So you keep reading the series, even though the books start getting a little bogged down. I'm finding this current read a little bit like a treasure hunt. There's a lot of sand to dig though, but I keep coming up with little, or big, gems so it makes the work worth it. Living near Philadelphia with all it's Revolutionary War history makes it interesting, too, because that's what's going on in the book. So I'm enjoying it, and yet I'm not. I just want to read the good parts and move on to a much smaller, much more shallow and insipid, much easier book to read! But I can't until I've finished this one. So maybe I should get off the computer and read some more.

Oh wait! I forgot I was supposed to post more pictures of the blizzard. So without further ado, I give you THE GREAT BLIZZARD OF 2010 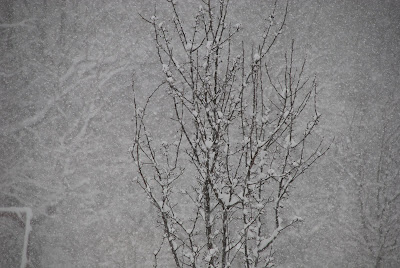 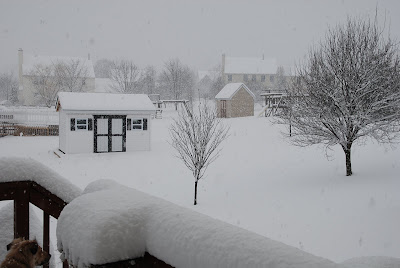 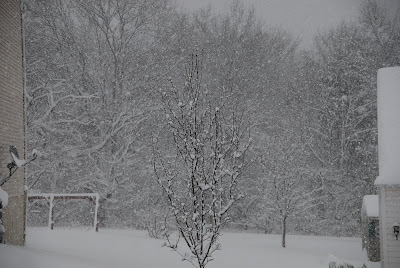 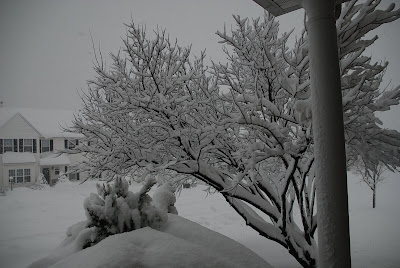 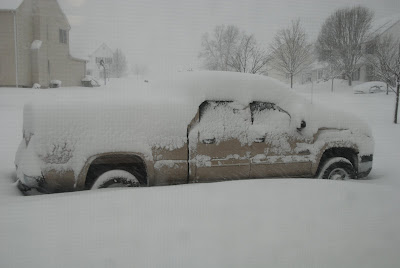 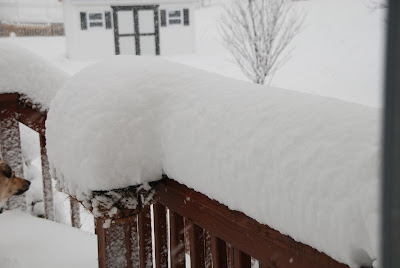 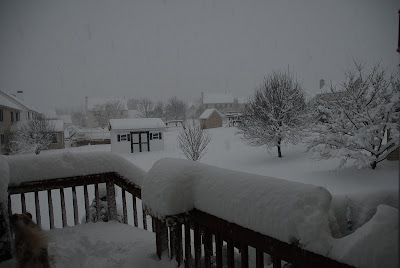 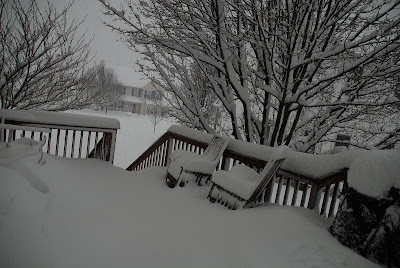 And how about these pictures of "Meerkat Brady", taken by Laura. He was looking for his girlfriend through the snow, but couldn't see over the drifts! 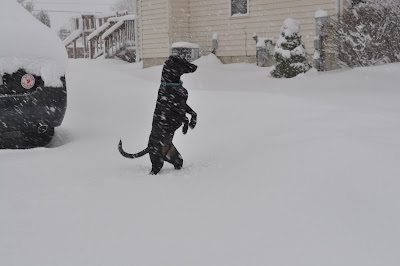 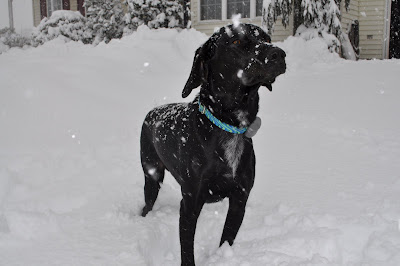 The Great Dig Out - Part One

Just a few pictures of The Great Dig Out. More to come... 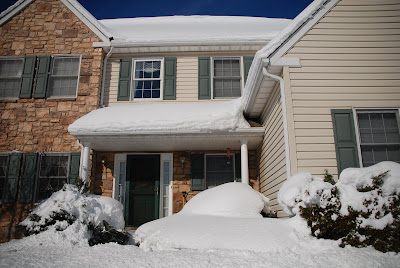 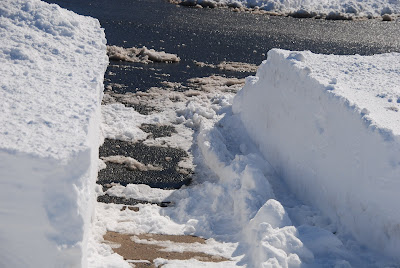 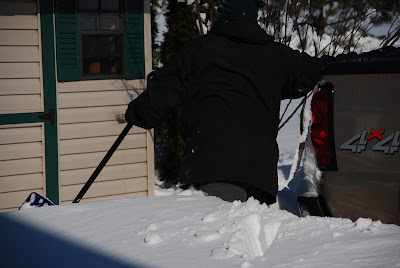 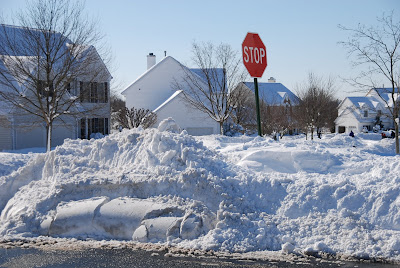 A Day in the Life of a Snowed In Family

We may not have been in a real blizzard Saturday, but we are today. It's absolutely beautiful outside - operative word being "outside". As in I'm inside and warm and comfy and I don't have to go outside at all today so I'll enjoy the view.

While at wine club Friday night we were talking about "The French Toast People". You know, the people who run to the store and buy up the eggs, milk and bread before a big storm hits. Which sounded really good to all of us. Sadly, I only had wheat bread and you just can't make good french toast with wheat bread. Ewww. It doesn't even bear thinking on. Monday I had to go to the store and I decided to grab a package of big, fluffy Texas toast bread for this morning. Oh. My. Goodness. It was the best French toast I've ever had. Ever. In my whole entire life. Sorry Mom. Your French toast was always yummy, but this was a new recipe I found with the teensiest bit of flour and it was simply exquisite. The sliced bananas, powdered sugar and whipped cream on top didn't hurt anything either.

Sookie was happily romping on the snow covered deck while Katie and I enjoyed our delicious breakfast. If I hadn't been so enamoured with my nummies I would have tried to get some cute pictures. She was trying to catch the snow as it fell, diving into the drifts and having a grand time when all of a sudden she started her vicious there's-a-very-threatening-monster-in-my-yard bark. Her hackles were raised - and the girl has huge hackles - and a very large chocolate lab ran up on our deck. Sookie yelped and growled and barked and jumped off the deck with the lab right on her heals and me yelling at her to get in the house. If you're standing at the door you can't see down to the bottom of the deck steps so I had no idea what was going on down there. I was in my slippers and as I was debating whether or not I should tromp through a couple feet of piled snow Sookie came hauling up the stairs (she's uber fast) and ran in the house. I just managed to get the sliding glass door closed before the lab practically slammed into it. Sookie was quite agitated, barking, whining, whining, barking and the owner of the lab finally managed to get her off our deck and back home. It was much too much excitement for what was supposed to be a totally lazy day!

Todd and Taylor watched a Bruce Lee, Jet Li or some such martial arts movie in the basement while Katie and I watched Meet Me In St. Louis and I got caught up on some work work. It was delightful. Of course, we couldn't start the movie until Sookie finally calmed down which seemed to take a good 30 minutes or so.

And dinner tonight? Cheesy Corn Chowder and sourdough bread. That stuff is plum larapin! OH! That reminds me, I need to get the stew meat out of the freezer for tomorrow's dinner. Because nothing says "Yea! It's another snow day!" like a rich, meaty stew. And guess what I'm making for breakfast in the morning. Yup! French toast. I can hardly wait!

That's right. It snowed for nearly 30 hours straight and we got a good 20 inches on top of what we already had from Saturday. The school called this evening and said one more snow day which makes for a very long weekend because the kids were already off for Friday and Monday.

Finally, I told my mom I'd be posting pictures of this new snow today. As you can see there are no pictures. Hopefully I'll be able to post some tomorrow, though I think it's going to take all four of us to make even a dent with the necessary shoveling. Maybe they can shovel and I'll be the photodocumentarian. Brilliant!

Technically the blizzard didn't reach quite this far north, but we did get a lot of snow so I'm saying we were in the Great Blizzard of 2010. It makes a nice blog title, don't you think?

A look up our street after the snow plow came through: 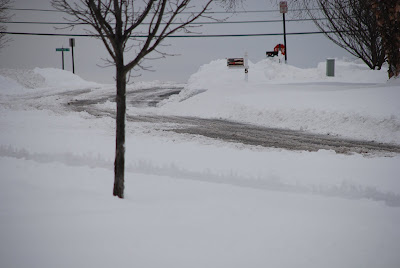 Sookie wasn't too sure about so much snow at first, but once she figured out how to maneuver she loved it. 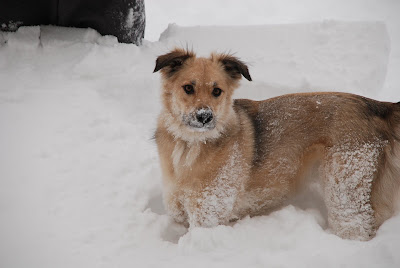 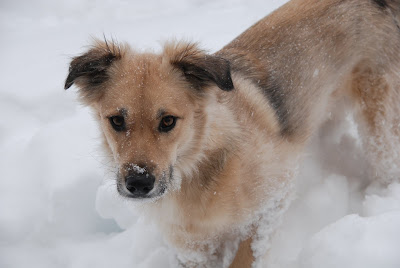 Not such a great day for rocking on the deck: 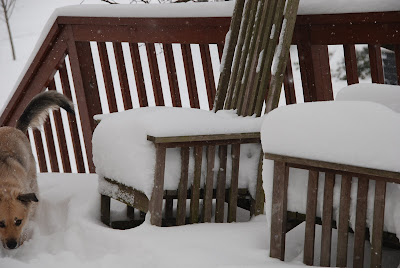 A view of the green belt - not so green: 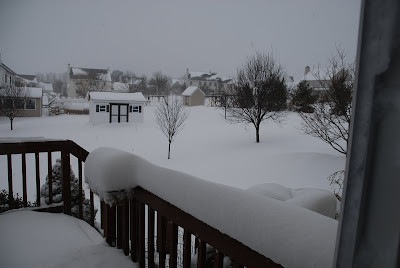 Pretty, isn't it? Especially because I didn't have to get out in it. Instead I just hung out in the house, sipping coffee in my flannel lounging jammies. I'd say it was a good day.