I was thinking I should maybe try to write a post since it's been a while, but I'm drawing a blank. Which is ridiculous because I haven't hardly posted at all this summer and a lot of stuff has happened. So I'll just think of random things to tell you about. 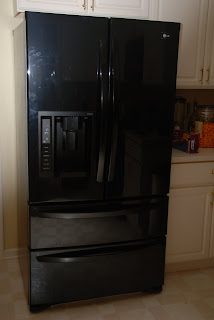 Hm... Let's see... Oh! I know! We got a new refrigerator last week. Not only did the old one make sad, scary noises, but it dispensed green, spinachy looking flecks in the ice. So on July 5th, while all the appliance stores were having Independence Day sales, we bought Leilani. Leilani is exotic and beautiful. Just look at her.

She was delivered a week and a half ago and we have yet to fill it up. I really should go grocery shopping, but, well, I won't bore you with my excuses. Right now, anyway.

The biggest problem with Leilani is that I now want new counter tops. Really bad. And if I get new counter tops I'll need a new sink and faucet and I definitely need new cabinet hardware. And if I'm doing all that I may as well get new light fixtures because I'm not thrilled (or anything resembling thrilledness) with what we have. But just this morning I mailed a check for a portion of Taylor's freshman tuition. I kissed the envelope before I placed it in the mailbox and said, "bye-bye new counter tops." Which - bear with me while I do the math -

Taylor's five year program puts him finished in 2015, Katie will start college in 2013 and let's be generous and say she finishes in four years, that makes it 2017 which is in seven years -

Right. So that means I probably won't be seeing new counter tops in this house for another seven years. Unless I was maybe frying bacon in the cast iron skillet. And I was standing on a ladder so the grease splatter wouldn't reach my face. And I picked up the skillet, but it was hot and greasy and, Oooops! It slipped right out of my hands and fell with a horrible crash onto the formica and, OH NO! It cracked the counter top! Hm... Well it's something to think about anyway.

And there you have it. An actual post. That's two for the month of July. Maybe I'll even do a third. 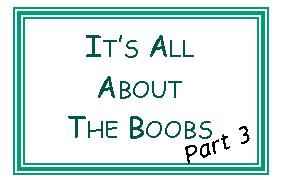 IAATB - Part II (And An Apology)

First the apology. I'm sorry. I know there are several of you whose lives revolve around this blog and I've gone over a month - a whole, long month - without blogging at all, the longest I've ever gone. And after I promised to endeavor to attempt to try to do better. I will make no more promises. Ever.

I'm just joshing you about people whose lives revolve around this blog. I only know of, like, two. Not really. Just one. Okay. That's an exaggeration as well. I just thought it would make me sound more important. Guess I'll just get on with it.

June was quite a month around here, but before I can elaborate I need to finish the It's All About The Boobs trilogy. Of course, it's been so long since the events happened that this will be the Readers' Digest Condensed version because I've forgotten most of what I was going to tell you. So here we go:

On Sunday, May 9, Mother's Day, I got up super early and met my friend and photography mentor, Gail, in the church parking lot and we drove into Philly for the Susan G. Komen Race for the Cure. Just the hanging out with Gail was awesome. We never seem to run out of things to talk about. I love that about her.

I was smart and brought my pink gloves with me, just in case it was cold. It was freezing. I was dumb and left the gloves in the car. I was also in need of coffee, but the line to the Wawa tent with the free coffee seemed like it went all the way back to the church parking lot we had just come from. The line for the free iced tea was non-existent, however, so I got my caffeine fix that way. On a frigid morning, but you know. We do what we need to do.

We mosied toward the Art Museum steps where they have the Survivor's Parade and for some reason, I didn't want to do the parade. I just wanted to stand there with Gail and watch it. It was the right thing for me to do because walking down those steps with all the other women in the pink survivor t-shirts is very surreal. But watching all those pink shirts move down the steps is very moving. Next year I'm sure I'll take that walk, but I'm glad I got to watch it as a survivor.

The rest of the morning went pretty much how you'd expect it. We walked and walked and walked and then went to brunch in the city before coming home, where I took a nice, long nap. I know there were other things I wanted to mention, but I can't remember. I'm sure they were vastly entertaining and worthy of some kind of an award, but this is what I get for waiting so long to report.

I had actually planned to write Part III in this post, but I just don't have it in me. You know that road? The one to hell? Well I'm paving that sucker faster than I can say "Bob's Yer Uncle," and I can say that pretty fast. So at some point - I don't know when - I will get to Part III. Really. But I'm not going to promise.