Hola, Amigos! I don't have time to hang out for very long, but I just had to post a quick update.

My folks flew in from Little Rock on Wednesday (don't even ask if their arms are tired because that joke is so old and corny it does not bear acknowledging) and we've been enjoying our visit. They actually just sold their house - it sold in four days - and will be about the business of packing up and moving when they get back home so I hope they can relax and enjoy their trip! Except my mom doesn't know how to relax so very much, which works out very well for me because she cleans instead. I'm okay with that.

Yesterday was our Easter Eggstravaganza at church. What a trip! We had 40,000 eggs and several egg hunts for different ages, a petting zoo with the cutest baby cow (I know, I know - that's a calf) and the biggest bunny I've ever seen, two bounce houses, free popcorn and cotton candy, carnival type games, balloon stylists (I have no idea what they're really called), face painters --- it was great! I helped out at the MOPS table making pinwheels. It was fun because I saw a lot of preschool families and some of the kids would look at me like they weren't quite sure why I would be somewhere other than the preschool. There were a ton of people and they all looked like they had a good time. I know I did!

OH! The most exciting thing around here is that we finally replaced our microwave that went out in November. Todd and Taylor installed it yesterday and we've been using the heck out of it. It doesn't make funny noises and it actually heats up the food! I keep looking at it lovingly - almost like I look at my camera - and sometimes I even caress it a little when I walk by. I now remember what life was like before a microwave and I'm telling you, it was lame!

In other news, I started Weight Watchers for the umpteenth time a few weeks ago. So far so good. I think I've lost around 7 pounds which is a drop in the bucket, but I've gotta start somewhere. This times feels different because I actually want to stick with it and it's almost easy. (Hope I didn't just jinx it!) This week will be a bit challenging with the rentals here and Easter and all, but if I can just maintain I'll be happy. Of course, I'll be happier if I still manage to lose.

And that, my friends, is what's going on around here. Until next time... 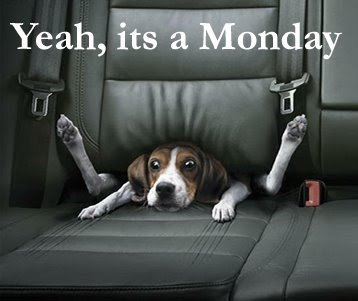 Just about anybody who's ever been acquainted with me knows I am NOT a morning person. Most everyone also knows I must have coffee in the morning. MUST. Todd had to be at the train station about 20 minutes away by 5:45 this morning. I'm still drooling into my pillow at 5:45 in the morning! Last night I set the coffee maker to start brewing at 5:00 this morning and when I came downstairs a little after it hadn't yet begun. I wanted to cry. But I didn't have time so I hit the brew button and thankfully was still able to take a cup with me.

We got to the train station between 5:50 and 5:55 and guess what was right next to it? A Starbuck's! My heart gave a little leap of joy, kind of like when you're crushing on somebody and you unexpectedly see them at school or at the mall and your heart jumps - know what I mean? So yeah, I saw the crazy mermaid lady on the Starbuck's sign and got all excited. Except it was so stinkin' early they weren't even opened yet! It was a cruel twist of fate.

After a shower and more coffee I packed my lunch for work. I pulled a bag of baby carrots out of the fridge and thought the bag had already been opened, but it was still sealed and very full. So I opened it, filled my baggy with sweet, crunchy, orange delights, and zipped up the bag to put back in it's drawer. I picked up the bag and cute little baby carrots when sprawling all over the kitchen floor. It HAD been opened, but not by the convenient, resealable end. Someone (could have been me, not sure) ripped a big hole in the bottom.

I walked around the corner and into the hall with all the preschool classes this morning, only to see two of the assistants standing with a little girl and a trash can. Poor little thing had thrown up all over the floor. One can't really escape the "expression of bodily fluids" when one works in a preschool - even in an office capacity. So Rochelle (one of the assistants) and I cleaned up the "event" after Marcia (the other assistant) got the little girl taken care of. Neither Rochelle nor I are real good with vomit and I was really wishing I had Todd's old double canister gas mask he had been issued when he worked at the Pine Bluff Arsenal. He used to wear it to clean up after our kids and I would always make him say, "Luke. I am your father", like James Earl Jones because the mask made him sound like Darth Vader. But I digress. All this was to say that one hour into work this morning I was cleaning up barf.

I stopped at the grocery store on my way home today to pick up some grape juice and cheese spray for my sick Katie and a bunch of yogurt for me. I went through the self check-out line and filled a bag full of a few things and all my yogurt. It was raining when I left and I didn't want to take the cart with me, so I grabbed my three bags and took off for my car. The one bag was so heavy that the plastic handles started stretching and right before I could get to my car the handles ripped and little yogurts went rolling around the parking lot! Not really. Well all of it until the ripped part. It was very close, though.

I got home and parked in the garage right before the sky opened up. It was very pleasant - rain, lightening, thunder - nice. I got some work done (I come home early on Mondays to do some writing for work) and then my early morning caught up with me. About 4:30 I laid down on the couch, Sookie curled up at my feet, while Katie snuggled in the big green chair and watched America's Top Model. Next thing I know, it's after 5:00. Lovely...

"Maybe one of the neighbors is doing something with some strange machine in the greenbelt," I thought as I got out of bed to look. When I opened the blinds, however, there was a hot air balloon headed for my driveway! I couldn't see the basket because it was on the side of the house, but the balloon looked almost close enough to touch and it was level with me as I looked out the second story window!

I was afraid it was going to land on the truck (but it turned out the truck was in the street instead) and I ran down the stairs yelling, "Oh my gosh! Oh my gosh!" I opened the blinds that overlook the driveway and the balloon was gone. So I grabbed my camera and opened the front door to see this: 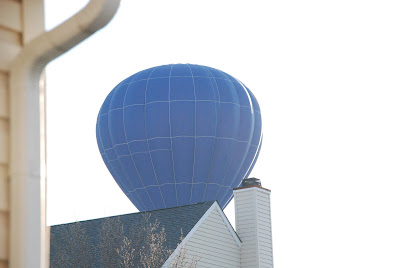 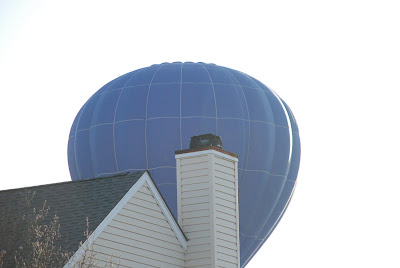 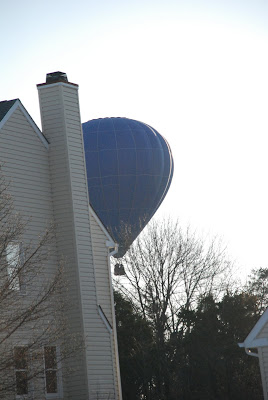 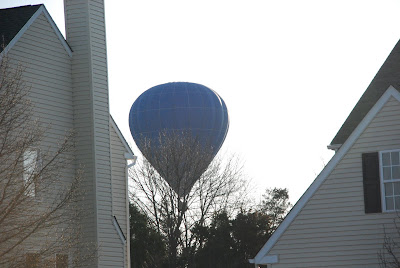 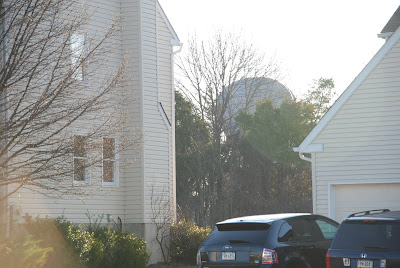 Poor Todd is in Boston so he missed all the excitement. I just wish I slept with my camera so I could have gotten a shot of the first thing I saw when looked out the window.

Alright. That's the exciting happenings around here. Two posts in two days. Or maybe I should say two posts within 24 hours. That sounds even better!

Off to clean house now. Mom and Dad are coming for a visit on Wednesday and I don't want my mom to have too much to do around here!
Mused by Jenster :: 9:23 AM :: 3 People musing:

You may or may not recall the goal I had set for myself back in January. Not a resolution for the new year. Homie don't play that. But I did make a goal to write on this blog and my Trippin' Through The Bible blog at least once a week. I did really well for about a week. Or maybe a month. So I'm scrapping that goal because it was a failure of epic proportions. Moving on...

My last post was about the February MOPS meeting and this post will be about the March MOPS meeting. This past Wednesday I spoke about breast cancer. I had worked on gathering the facts and figures and statistics and risks and plans and prepared a very detailed, very educational talk. It was good, too. Very informative and oh so very boring. It just didn't feel right. I'm not an educator. I'm a gabber. So Tuesday night I tossed my hard work out the window and just let it go.

I had nothing prepared for Wednesday night. No notes, no cue cards - nothing. I just told my story. The problem with that is there's a lot of story. I could easily have talked for hours and I feel almost like I did. I do know that by the time I sat down I'd been up there for somewhere around an hour, give or take. Part of that time, though, was a question and answer period at the end. These ladies asked great questions and I was more than happy to answer them. At least then I knew I was talking about what they wanted to hear.

But the talk was easy. It felt right, not forced like the more informative talk would have been. And they were such a gracious audience and made me feel like they might have actually been interested! Really!

My friend, Gail, who is a rockin' photographer extraordinaire, made boob cupcakes. Quite cute, too, with little nipples. Except for mine. Mine had a heart tattoo instead. 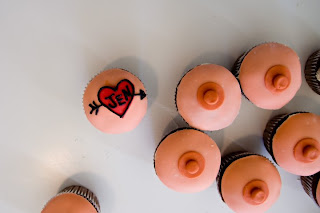 Aren't those great? I debated whether or not I should post the picture here because, you know, this blog has always been pretty PG. Or maybe PG-13. Definitely not R. Maybe M for mature audiences like on a video game? I dunno. Anyway, I decided to go ahead and post the picture because: a) I think the cupcakes are awesome and very appropriate to the subject matter; and b) I think her simple picture of cupcakes is artistic. OH! You should see the Cat In The Hat cupcakes she made and the pictures she took of those! Really good. I could go on and on about Gail, but then this post would be about her and not me and we all know how narcissistic and egotistical I am so I'll just leave it at that. Except to say she's really awesome. Really super and incredibly awesome.

And that's all I have to say about that.