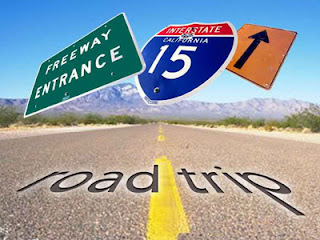 Tomorrow morning we're loading up the car and heading out for a 19 hour drive through six states. Road trips aren't anything new to us, but we have the new dynamic of taking the dog with us this time. Now some of you might be saying to yourself (and not for the first time), "Are you crazy?" My answer to you is a resounding YES!, but that has nothing to do with the road trip.

We're headed to Arkansas for a week to visit my folks. I wish we had the time to see everyone there is to see, but we just won't be able to manage it this trip. It would take us a good two to three weeks, I think! And even then we probably wouldn't get to spend enough time with those we want to. Hopefully next time we'll catch up with those we miss this time.

I don't know how much internet time I'm going to have while we're gone so there's no telling when I'll be back. But I hope to have lots of pictures and even better stories!!

So until the next time...

Where's A Drill Sergeant When I Need One?

You may recall I wrote about Losing Weight And Other Inconveniences back at the beginning of June. In this self-prophesying post I mentioned I would be down a size by the end of July. I forgot to tell you, however, that I was talking about July 2010. Which is a good thing because there's only one week left of July 2009 and it's not EVEN gonna happen.

We're getting ready for our vacation and I went to the outlets today to get a few more clothing items. Oh my, did I ever see such cute clothes. I coveted crops, capris and camies. I drooled over dresses and denim. I swooned over skirts, shirts and even sweats. I was bewitched by blouses, bermudas and yes, brassieres. I admired activewear and longed for loungewear. I yearned for -- well, you get the idea. Not only were the clothes appealing to me, the end of summer sales were enticing as well. I could have gone crazy.

For a good while there I could rationalize the extra weight. Surgery, chemo, medications, more surgeries and more medications... it was understandable that I had gained so much. It's been two years, however, since my last surgery. I have no excuses anymore. Yes, it's harder than it used to be for a couple very real reasons, but it's not impossible.

I've decided I need a drill sergeant with me at all times. Someone to yell at me and call me "grunt" or "boot licker" for those moments of weakness. When I choose to watch TV instead of going for a walk. When I reach for the ice cream or those infernal cow tails that have me under their spell. When I drink too much coffee and not enough water.

Obviously my own misery isn't enough motivation. Nor are all the pictures I keep being tagged in on Facebook. Those that when I see them I gasp and think, "Oh my gosh. I don't really look like that, do I?" The ones that crumble the delusions of my imagination.

I would ask Todd to be my drill sergeant, but no good could come of that. I would just get angry at him for being so mean to me and then he'd just feel bad and go to the store and buy me a box of Goobers and probably Starbucks for a venti White Chocolate Mocha with extra whip.

What's the point right now, though? I'm off for almost two weeks of vacation and I'm certainly not going to be all that good. I'll start up fresh the second week in August. Maybe by that time I'll have found someone to yell at me without making me mad. And by July 2010 I'll be shopping for the modestly curvy!

Katie's friend, Devon, is spending the night tonight. Todd and Taylor are watching yet another painful baseball game and frankly I'm all baseballed out. So before Devon got here I told Katie that I would come down to the basement with them.

Me: We can watch a good movie and I'll sit in between you guys and I'll text my friends while you're texting your friends and we can do each others' hair and it will be so much fun!

Devon gets here, says hello to the rest of us and the girls head for the basement.

Me: You girls go on down. I'll be there in a minute. Then we can watch "High School Musical, III" and talk about how cute Zac Efron and Corbin Bleu are while we do our nails!

I then sit down to play on the computer while the boys watch the incredibly boring baseball game and decide to text Katie downstairs.

From the bowels of the house we hear, "Stop texting me!"

When he didn't hear any reply Taylor called her on his cell phone.

Katie: What do you want?!

Katie: I know! I got his text!

The sad thing about all this is how highly enjoyable I found it. I suppose I should get a life, but it's these simple things that make this existence so entertaining.


God blesses those who are humble,
for they will inherit the whole earth.
Matthew 5:5 (New Living Translation)
As most everybody who reads this knows, being a parent is hard work. We're responsible for so much. There are the basics like feeding, clothing, safety, health, etc. That's the easy part. The hard part is building character. I mean, we're going to build some kind of character regardless. The challenge is what type of character.

Tonight I did my best to instill a humble spirit in my daughter. She sang harmony in the band at church tonight and rock star status can have a detrimental effect on one's ego. Not only that, but her stage presence was suffering. So I stood in the back with two friends, Stacey and Darlene, and danced for a reaction. I would say I was getting my praise on, but I don't think my movements screamed "Moved by the Spirit" in any form or fashion. What the three of us accomplished was getting her to crack up so much that she couldn't even sing. Which leaves her with a humble spirit. Or humiliated spirit. Is there a difference?

To add insult to injury to the lesson, Katie and I were both wearing jeans and a green t-shirt. Not on purpose, either. But when a high schooler is dressed like her mommy - well, not so cool.

Yea, how didst thy delight in thine offspring's mortification?
With great leaping and joy, sayeth Jenster.
From the Book of Jenster

...there are muscles that run down the back of your thighs? Oh yes there are. And do you know how I know this? I weeded off and on all day yesterday. Now instead of gracefully sitting down on the couch I stand in front of it, bend over slightly at the waist, rock back on my heels and fall back, wincing at the searing pain in the back of my legs as I go. I'm such a wimp.

How is everybody? It seems like it's been forever since I chatted with any of you. Apparently I can't be a wife, mom, friend, employee and blogger all at the same time. Something's gonna hafta give.

I vote it's the mom part. My sole intention of having kids was so that they could keep my house clean and do my bidding and they're not doing a very good job of that. Although they did go to the store last night for Double Stuffed Oreos. There is that. But is that really enough??? I dunno.

My whole family has been through some head cold thing in the last couple of weeks. Taylor started us off a week before he and Katie were going to Michigan for Christ in Youth. By the time they left he was feeling much better, but Todd was sick. Then Monday morning I get a call from Katie in Michigan and SHE was sick. (Don't tell anyone because I don't want to mess up my reputation as a soulless mom, but it made me so sad that my baby was so far away, all alone in a dorm room and sick! I wanted to drive right over there and get her!) She's a toughie, though, and ended up having a great time there. I thought I had escaped...

...until Sunday night. My throat hurt, my ears were plugged, I was snotty. Shoot!! Monday and Tuesday were miserable with a low grade fever and sheer exhaustion. All I could think of was how did Katie ever manage. By Wednesday I was back to work and felt pretty good, but the fatigue from this fairly mild cold is insane! I've been trying to weed today and I don't get very far before I'm so tired I'm shaking. Or maybe it's just my aversion to weeding. Maybe a combination... Whatever.

In a little less than two weeks our church will be putting on Kids' Camp Galaxy - a free community event and we're expecting over 1,000 kids. Talk about a lot of work! I'm fairly heavily involved because of my position as the administrative assistant to Valley Kids, the children's ministry department. But folks, let me tell you something. I am in awe of these people who put this on every year. The creativity, the organization, the drama, the games, the lessons - these people put their everything into making this an outstanding event every.single.summer. And what's even more incredible to me is that they do it because of how much they care about children. I mean seriously care and want to make a difference in their lives! (I know what you're thinking. Why the heck do these people let Jen work with them?? Some mysteries will never be solved.) All kidding aside, it's very exciting to watch all this come together from the inside.

Well friends. I really have to go to the grocery store. Can I just take this opportunity to tell you how much I despise grocery shopping? I remember when the kids were young and the first time in what seemed like an eternity I got to go to the store by myself it was the coolest thing ever! Now I practically beg them to come with me so they can take half the list, but they always have plans. How convenient for them. I think their plans should include cleaning up the kitchen!!

So after all this griping about weeds and kids is it wrong of me to shamelessly plug the next post on Trippin' Through The Bible?? Whether it is or not, I'm going to anyway.