My Week In Arkansas, Part Two

When we last parted I was regaling you with my wallpaper faux pas. Let's move past that, okay?

After a stout cup of coffee and cereal, Shelli and I went back to work. She worked on the entryway while I continued to angrily rip gently pull the rest of the wallpaper from the kitchen wall. Mom and Dad went to pick Terri up at the airport and Rhonda showed up to see my mess handiwork. I think I'd finished the removal and had done a bit of Spackling and sanding, preparing the wall for the next step. But I didn't have what I needed for the next step so Rhonda drove me to Lowe's for primer. Used to be when I got in this predicament I would buy some drywall mud and mix it with the paint. That worked pretty good, but it made the wall almost too textured. This day, however, we found wall texture specifically made to mix with paint. So I bought that, a can of primer and voila!!

Terri was at the house when we returned from Lowes. She tried to convince me and Michele that she came to supervise, but two against one trumps the oldest. So Shelli worked on the hallway (the entryway was finished and looked great!), I set out to redeem myself and Terri started taping the eating area.

After I got the textured primer applied I began to relax. It looked pretty much like a regular wall so I knew most likely I was going to get to go home the following Tuesday. Which was a good thing because I was almost getting those little tiny twinges you get when you kinda, sorta miss someone.

I wish I had taken notes while I was there like I'd meant to do, but the slave drivers my sisters cracked the whip so I wouldn't have had time to write anything anyway. Since I know somebody will tell on me I'll confess right now that I did take frequent Sudoku breaks. However, they were only to keep my brain sharp against the dulling effects of paint fumes. Anyway, since I didn't keep a paint trip journal I'm a little sketchy on when we finished one project and started another, etc. Not to worry, though. I'm pretty sure Terri or Michele will be perfectly happy to fill in any gaps.

What I know for absolutely positive (because how could I forget) is we had a delicious roast with vegetables and salad for dinner that night. And what roast beast meal would be complete without following up with ice cream later? So the three of us hopped into the folks' car and drove to Baskin Robbins. My sisters had to decide what flavor they wanted while all I wanted was Vanilla. "Boring", you say? Quite the contrary!! Vanilla ice cream, melted chunky peanut butter and chocolate syrup. Now THAT'S delicioso!!

Once again we stayed up too late.

At the risk of being redundant, we trimmed. And taped. And painted. I believe this was the day we put the finishing touches on the dining area. My parents have cathedral ceilings in the living room and we had to do one side at a time. So I trimmed one of the "triangles" on Saturday.

We couldn't get too into the painting because we had some major celebrating to do. We worked for a couple of few hours and then cleaned up so we could take our parents to dinner for their 55th anniversary. Yup. You read that right. Fifty-five years. We took them to the same restaurant the family went to five years earlier after their 50th anniversary party.

I was driving so instead of going straight home after dinner I took the scenic route past our old house. It's still as cute as ever. *sigh* I miss my wide front porch. And the most beautiful redbud tree I've ever seen still grows in the front. 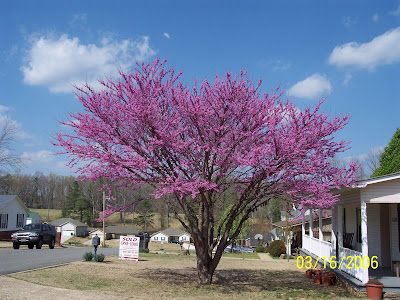 Comfy jammies, conversation and ice cream completes day four. I'll try not to go so long before the final installment of the My Week in Arkansas chronicles.