Sunday night I stayed in Glenn & Cristie's room with Cristie while Glenn slept on a roll away bed in our room. Monday morning was another fabulous breakfast, a trip to the salon and getting ready for the wedding. The minister came to the B&B and we followed him to The Forty Steps where we met up with the photographer. Todd and I pulled double duty for the wedding. Not only were we the best man/matron of honor, we were also the bouncers. We stood at the top of the stairs after the wedding and kept people from walking down while the photographer took pictures. 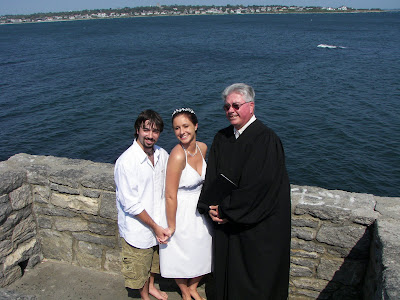 As you can see it was a gorgeous day for a wedding. The wind was pretty fierce up top, but when we got down the steps it calmed a great deal.

After the wedding we went back to the B&B for a little while and then headed into town for dinner. We had reservations at a swanky restaurant, but ended up eating at The Red Parrot instead. It was casual and relaxed and delicious. 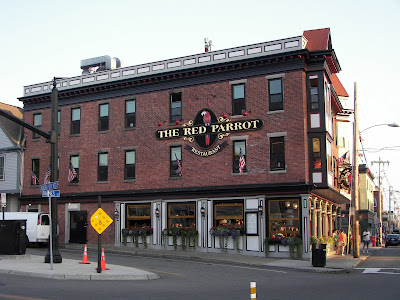 As usual, I took pictures of everyone’s meals, but I’m not going to post them. Not in the mood. Sorry.

When the meal was finished we headed back to the B&B, dropped the newlyweds off and then went for a drive. Here are a few photos of the surrounding area. 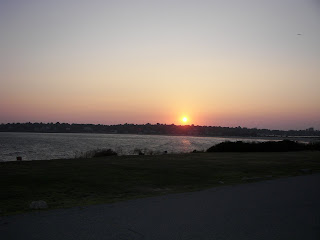 This is self explanatory 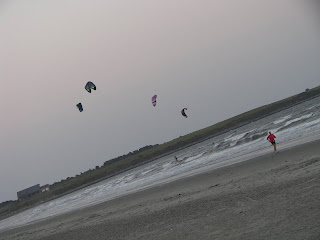 These were a lot of fun to watch. These guys were on what looked like a wide water ski and the parachutes pulled them over the water, sometimes pulling them twenty feet into the air. I wish it had been lighter outside so I could have gotten a better picture. 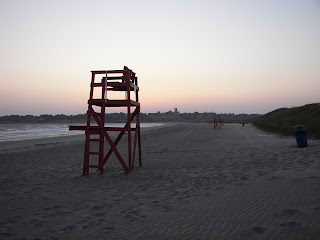 I thought this was a cool picture of lifeguard stands. 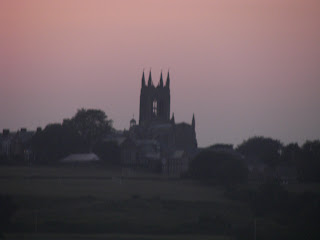 By the time it was dark I needed something resembling chocolate. After looking for an open coffee shop we ended up at Starbucks. I ordered a toffee almond bar to go with my White Chocolate Mocha, Todd ordered a piece of lemon cake to go with his funky kind of tea, and we kicked back there for a while. The music was good, the company was good, the food was good – what a great way to cap off a great day.

Tuesday morning found us with the usual mixed emotions we have after a get away. We thoroughly enjoyed our weekend. Hanging out with Glenn & Cristie; seeing the sights; relaxing in the B&B garden or a coffee shop; reconnecting as a husband and wife as opposed to a mom and dad. But at the same time the roles of mom and dad made us anxious to get home and see the kids.

So after a breakfast with the wedding couple we hit the road. The traffic was so much better coming home than it had been going up. We only had one glitch in the form of the biggest idiot I've ever had the displeasure of dealing with. 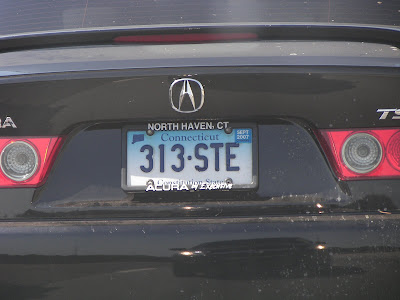 If you know the owner of this car, please feel free to kick him in the shins as hard as you can whilst wearing steel-toed shoes. (Please do not translate as a plea for someone to break his kneecaps or anything like that)

The speed limit was 55, we were in the fast lane going about 70 (as was everybody else in the fast lane), when the bonehead came zooming up behind us at an extremely high speed. Todd couldn't get over because there were cars in the middle lane. He was going to speed up so he could get around them quicker, when the moron pulled over onto the shoulder as if to pass us. There was a cement barrier and not enough room.

That made Todd mad so he didn't speed up any. Didn't slow down any, either. When we were past the cars in the next lane he was about to pull over, but the boob shot in between us and the car in the next lane, weaving in and out of lanes in his effort to drive as fast as he possibly could.

Whatever. Todd pulled over into the middle lane and then the fool did one of the dumbest, most asinine things I've had the misfortune to witness. He jerked his car into our lane and slammed on his breaks. On the freeway. Apparently he was miffed that Todd hadn't sped up to let him pass faster.

This miscreant who was in such a dadgum hurry slowed down to somewhere around 30 MPH. He'd speed up a little then slam on the breaks, causing the people behind us to have to slam on their breaks. The jackass was lucky he didn't cause an accident.

There are no words to describe just how angry I was. Me, the nonviolent one, wanted nothing more than to slug the daylights out of the imbecile. Cars and trucks were whipping around us, honking their horns and gesturing angrily at the blockhead. And the schmuck wouldn't let up. So I grabbed the camera and shot this picture. Then I flipped open the phone to call 911, but he saw me and zoomed off at the next exit. I like to think that wasn't his planned route and he was frightened off by my quick and vengeful wit.

What a pitiful loser.

The rest of the ride home was quite nice. Except for sitting on the George Washington bridge in New York. But once we got past that it was clear sailing the rest of the way home.

And now you know the REST of the story.