Or wicked awesome! Or bad dope!

No, I'm not talking about illness, evil or drugs. It's rock talk for cool! Or hot! Or crazy insane!

No, I'm talking about the weather or a mental state.

I'm talking about Guitar Hero II - a video game in the same vein as DDR, but instead of dancing on a floor mat, you play a fret board on a little plastic electric guitar. 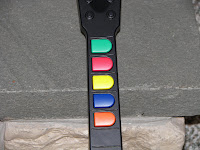 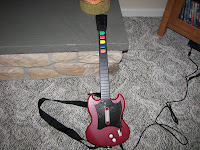 Taylor's birthday is at the end of April, but the video store down the street was closing and they had some sweet deals, including Guitar Hero II. It was his idea to buy it for him as an early birthday present.

Lucky for me he has to go to school and has a busy social schedule. I am pleased to report I have graduated from Easy to Medium. I ROCK!

Feeling unusually maternal this morning, I offered to throw a frozen chocolate chip pancake in the microwave for Katie while she was getting dressed. "Yes, please," she called downstairs, the pleasant surprise obvious in her voice.

I placed it on a nice white plate and set the microwave for 30 seconds, just like the directions said for one pancake. My back to the kitchen, I had no idea the first floor was filling up with smoke until Katie came down.

So now I'm thinking I may have set the timer for 3 minutes instead of 30 seconds, but I really don't think so. I'm not usually THAT scatterbrained. 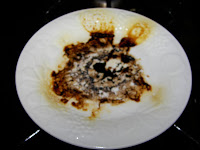 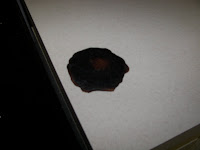 Whatever the reason, the pancake now looks like a small, black paving stone and I think my plate is ruined. 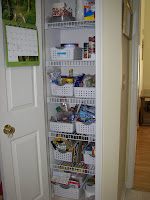 I went through and organized our small pantry yesterday. Doesn't it look nice?

I bought a bunch of plastic bins from Target, took everything out of the pantry, threw a bunch of crud away, filled the bins, placed them back on the shelves and voila!!

Very happy with myself, I was. Until I turned around and saw this: 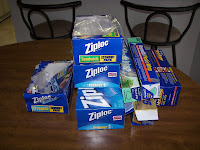 Now there's no room for this stuff. Time to get creative...